Former City Finally Living Up to Its Potential

I lived in Poughkeepsie for much of the past decade, though I did eventually decide to sell my home and move to Stamford to increase my access and exposure to the greater NYC area. For several years, especially in the middle of the decade, I would tell people anybody who would listen that Poughkeepsie was a great place to live and had only to take on a couple projects around the city and then do a better job of singing its praises to realize a period of growth and prosperity. What I didn’t know was that most of the other Hudson Valley cities were going to experience this growth and prosperity first. Like I said, the city hasn’t always done a good job of marketing itself. 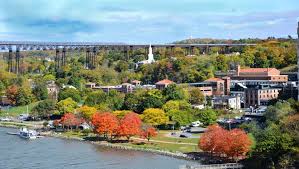 That changed a couple years, when the city hired Ashworth Creative Marketing Agency to showcase what the city had been doing to revitalize and launch its post-industrial identity as a commercial and cultural hub. It’s about time. The creative marketing agency launched PoughkeepsieGO, where in contrast to the city’s official website and basis information resource, the online presence of the PKGO campaign takes a more active and editorial approach to promoting the city’s activities and potential for the future. This site features a number of people and projects that show where the city is headed. The Poughkeepsie Underwear Factory renovation. Tim Massie and the new Vassar Brothers Medical Center. First Friday Poughkeepsie.

Now, Poughkeepsie is showing up on the radar of major metropolitan markets. For example, the NYTimes recently published a feature article, pointing out that the city was finally catching up to other cities dotting the generally prosperous Hudson Valley area. As chagrined as I am that the city’s latest revitalization didn’t arrive a year or two earlier, I’m still proud of the way it was done. City “revitalization” or “redevelopment” also seem to be marketed the same, even as these projects can go a lot of different ways with myriad effects on the residents. Some of these projects are problematic from the start. Others are well-intentioned and even well-planned but fail to deliver for one reason or another.

Here are some examples I’ve heard and read about that make me some combination of angry and grateful. Angry for the residents who must watch their city get mismanaged. Grateful for having lived in Poughkeepsie and other cities that seem, more or less, to enjoy smart leadership.

Who is Doris the Psychotic Housewife?

Learn about who writes this blog.

Make a Confession to the Psychotic Housewife